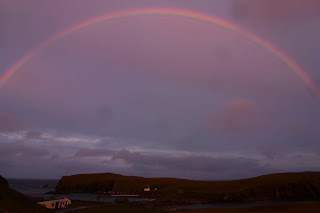 The Siberian Rubythroat was seen again on the morning of the 23rd, but with conditions deteriorating there was no sign later on so, sadly, it proved untwitchable for anyone not lucky enough to be on Fair Isle at the time. A brave effort was made by a charter plane that had got close to Fair Isle on the basis of the positive news from the morning, before low cloud over the airstrip caused their diversion to Sumburgh (where they learnt of the Cape May Warbler on Unst that was also out of bounds due to poor visibility). Although the cloud lifted for a short while in the late afternoon allowing their plane to get in, the 45 minutes or so available on Fair Isle weren't enough to turn up the Rubythroat and so they had to return home empty handed. I suppose twitching wouldn't be fun if you got the bird everytime, but it doesn't feel that way at the time (I've quit twitching several times after long-distance dips!).
The weather has also meant that we went without any transport to or from the island from last Friday until Thursday evening, although planes have now finally reached us and there is hope that the Good Shepherd will sail on Saturday. Everyone has coped remarkably well with the issues surrounding being stranded; missed international flights, missing family, delayed trips to Unst (although several people have now made it from Fair Isle to see the Cape May Warbler) or the threat of continental breakfast on Saturday instead of the usual full Scottish. No doubt being present for the stonking male Rubythroat helped matters.
Although the last few days of October have turned up some cracking rarities in their time, there is now a distinctly ‘end of season’ feel to the island, with only a few new migrants noted in the last couple of days as the weather has started to feel more wintry and less autumnal.
A Barred Warbler was new (and rather late) on 23rd, when there were also 2 new Little Buntings (one of which lingered to 24th) and a Ruff, whilst 2 Black Redstarts appeared on 24th (in what has been a quiet autumn for them so far).
Lingering birds of interest included the Olive-backed Pipit (now ensconced at Stackhoull), Red-throated Pipit (to 24th), Richard’s Pipit (to 23rd at least, although a large pipit seen briefly near Taft on 25th was presumably the same bird), 2 Bullfinch (to 23rd), Great Spotted Woodpecker (to 24th) and a Goldfinch.
There were also still up to 4 Crossbill, 3 Yellowhammer and a selection of Redpolls that included a good candidate for a Coue’s Arctic on 22nd-24th, although generally there were fewer migrants with a notable decrease in thrushes and warblers.
Some typical late-autumn visitors included a few Whooper Swans, more Greylag Geese on the move and a slight increase in ducks, with up to 15 Long-tailed Ducks noted. At sea there were Little Auk (25th, with a dead bird found on 23rd), Iceland Gulls (an immature on 23rd-24th, with an adult also on 24th), Great Northern Diver (a breeding plumaged bird on 23rd-24th), blue Fulmar and Sooty Shearwater (both 24th) but a noticeable decrease in Bonxies. Probably the highlight of the seawatching though was an immature bull Killer Whale passing Buness on 24th, whilst a group of Killer Whales were seen off North Light on 25th (from the plane as it departed Fair Isle!).﻿
﻿

So, one last push to try to end the season on a real high. Saturday's conditions seem to be the best bet for finding something good, with fresher westerlies taking hold after that and, with several species putting in late appearances (Paddyfield, Lanceolated and Arctic Warblers have all recorded some of their latest Fair Isle records this month), there's still the chance of one last Mega I reckon...
Posted by David Parnaby at 01:45