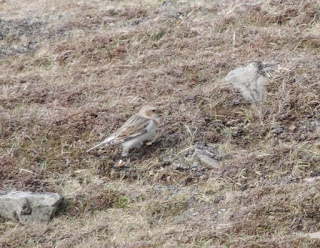 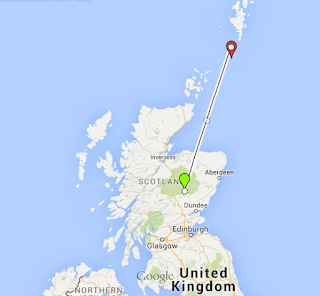 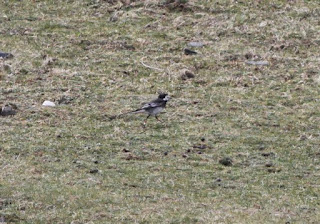 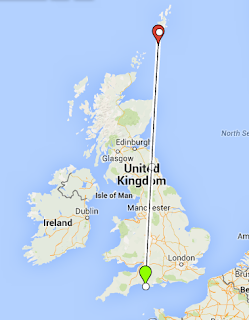 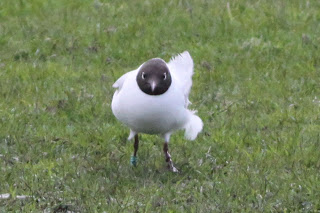 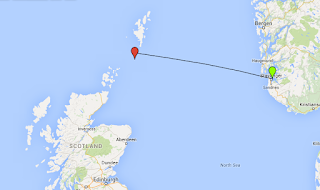 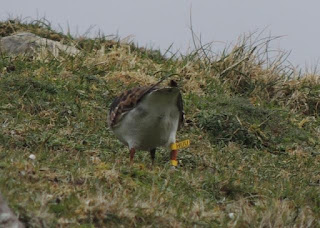 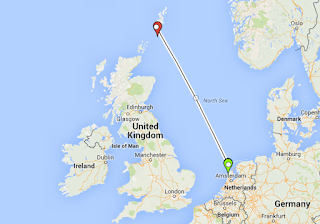 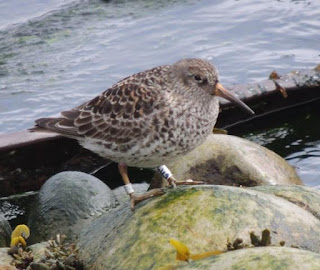 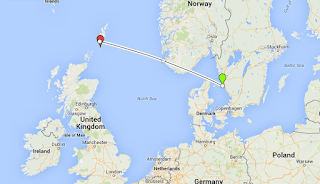 14th-25th April
A long time since an update, but not a huge amount to report. I'm currently looking after Freyja who's down with a cold and I'm starting getting some feeling back into my face and fingers after censusing Buness and the Havens and doing the Beached Bird Survey this morning in a rather cold NW wind. Once Susannah's back from Kirk, I'll be heading out round the rest of North, which I'm not expecting to be an entirely enjoyable experience!
The recent period has seen largely westerly winds, with a calmer period over 17th-20th that brought a few more signs of spring, but with north-west winds dominating the forecast for the foreseeable future, it looks like the early part of this spring is going to be a real contrast with the amazing spell of late-April migration last year.
We've not been without a few highlights though, chief of which was the brief appearance of a pale-bellied Brent Goose in South Haven on the morning of 25th, the first Brent on the island since spring 2010. A general theme of the highlights not being passerine-based was continued with the arrival of first one, then three, then five Gadwall from 20th-22nd, sadly the increase didn't continue and we were left with just the second-largest ever Fair Isle flock. I've mentioned before the 'island-network' of news, and it's interesting that Noss and the Isle of May have both recorded Gadwall in the last week, islands where they are even greater rarities than Fair Isle. It's the sort of species that doesn't feature on Birdguides, so perhaps a larger than normal movement of them wouldn't get picked up so easily - anyone else out there recorded Gadwall on their patch when they didn't expect it? Other wildfowl have been generally thin on the ground, although the first Whooper Swan of the year appeared from 21st and a couple of Pink-footed Geese have also passed through.
Other avian highlights have included a smart breeding-plumaged Slavonian Grebe (19th-23rd), only the 5th spring record in the last 18 years of this species which is a more regular autumn visitor.
Wader passage has brought the first Whimbrel (16th), Knot (17th), Greenshank (18th), Black-tailed Godwit and Common Sandpiper (both 19th) of the year, with the first Arctic Skua of the year returning on 25th. Other migrants have largley turned up despite the weather rather than because of it and numbers haven't been great as we've been relying on the brave (or foolish) individuals that have pressed on regardless. First arrivals have been represented by Willow Warbler (14th, with just a few after that), Blackcap (18th, with no more than two since), Tree Sparrow (a flock of 3 that arrived on 20th at the Obs and increased to 5 two days later), House Martin (21st), Sand Martin (22nd), Grasshopper Warbler, Tree Pipit and 2 Kestrel (all of which turned up in unpromising westerly winds on 25th).
One thing that isn't weather dependent is the arrival of cetaceans and after three unidentified dolphins were seen on 19th, we got the one that most people were after - Killer Whales. Initially seen by Jane as she was searching for colour-ringed Starlings in South Harbour, the three animals (including two adult bulls), moved up the east coast, with the rest of the Obs team (well, all of the team except me, as the sighting occurred at exactly the time I was called up to the airstrip for fire duty for the incoming plane) able to get out onto Buness or Roskillie to get good views as they went past.
Interestingly, one of the bulls had a fin that was totally collapsed to the right hand side, exactly the same as one that spent several hours off Fair Isle in a group of 15 animals in June 2013, there has to be the chance that the same animal is involved in both sightings (although unfortunately, it wasn't photographed on this occasion).
So, it just goes to show that it's always worth being out there, whatever the weather - and if we keep telling ourselves that in the next 10 days of westerlies, we might start to believe it!
Posted by David Parnaby at 11:45 1 comment:

11th-13th April
A couple of blustery days brought a few bits of note, with the 11th seeing a few Pink-feet on the move and a small fall that included 10 Fieldfare, 2 Brambling and a Sparrowhawk, with Wheatear rising to 28, then Shoveler and 82 Golden Plover on 12th. Full details, as ever, can be found on our latest sightings page, which is updated more regularly than this blog if you want to keep up to date with daily sightings from Fair Isle.

The 13th seemed even more promising when a very calm morning saw a few Redwing and Twite caught in the Obs mistnets, before Ciaran phoned with the startling news that he'd flushed a GOSHAWK from the wall next to Ditfield ('It was huge!'). Some frantic searching by the team failed to relocate the bird and so, after returning to the Obs for breakfast, we started to head out to census with the hope that we'd pick it up somewhere around the island. We hadn't even made it to the cattle grid (I hadn't even got my boots on in fact), when Ciaran heard the 'cronk' of a Raven overhead and looked up to see the Goshawk directly overhead.
It circled for a short while, then headed south with its, rather respectful, chaperone. It was later seen from Wirvie as it circled high and drifted north, presumably heading to Shetland as there were no further sightings.
The rest of the day didn't really matter in some respects, but it still went on to produce the first Ring Ouzel of the year amongst impressive counts of Meadow Pipit (520) and Skylark (332), as well as an increases in Chiffchaffs (9) and Bonxies (at least 40 were back on their breeding grounds).
The recent run of interesting wildfowl continued with two each of Pintail and Shoveler, whilst the Mute Swan remained (although it had a little fly around today, so maybe it's looking to move on - although perhaps it's more likley that it was following someone home after they'd fed it!).
Still all westerlies in the forecast at the moment, although we're doing reasonably well off them so far, so maybe we shouldn't get too disheartened, and it's still early...

Posted by David Parnaby at 23:22 No comments: