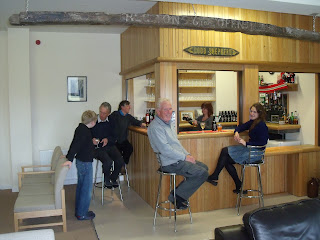 The 2012 season is rapidly approaching and things are getting more or less organised. Staffing is almost sorted out (see the FIBO website for details of remaining posts) and almost all of our volunteer places are now full. There is still some space for another researcher and we have one volunteering opportunity left: Bar Worker. The bar at FIBO opens nightly from c5.45pm until 11pm (and also Sunday lunchtimes). Any profits from the bar support the ornithological work of the Observatory (‘have another pint for the puffins’!), but perhaps more importantly, it is the focal point of the Obs social scene in the evenings.

We’re looking for someone who can work six of the evening shifts a week, starting at around 5pm to cover in the gift shop for a short spell, before staffing the bar for the evening. Generally the bar is not very busy (we're not talking about Sunderland city centre on a Saturday night), so we’d only have one person on duty and you’d be responsible for stocking, sales, cashing up etc, as well as helping to organise some of the social events along with the Ranger.

The main requirements are some experience of cash handling and till work, preferably bar experience (although other relevant catering experience may be sufficient), a friendly, outgoing, flexible and patient personality and the ability to live on a remote island.

The volunteer position is available from 1st May until 31st July (although we may consider shorter stays). In return for your work, you will be given free board and accommodation in a shared en-suite room. Although you may have to occasionally help with tasks such as unloading bar orders, you will have a lot of free time during the day to enjoy the island. There may be opportunities to help with the ornithological work if you are interested in doing so. The closing date for applications is 24th March and we’ll let you know if you’ve been successful by the end of March.

If you are interested, email fibo@btconnect.com or call 01595 760258 for details and an application form.
Posted by David Parnaby at 01:04 No comments:

Another big thank you to everyone who supports FIBO in whatever way, and what better way to support the work of the Observatory than to come and visit.
The prices are up on the website (from £60 per person per night for full board accommodation), but we can now announce two special discounts:

Discount for Young Birders
Great news if you’re under 21 at the start of 2012, we’ve introduced a new discount so you can visit for £30 per night (full board). The discount doesn’t apply to Sep 15th – Oct 10th, but what better way to discover some of the other fantastic times to visit the Obs (late October has produced some absolutely cracking birds in recent years for example). The young persons’ discount is for a limited number of places and applies to a dormitory room, so you may have to share a room.
We’re really excited to be giving young visitors the chance to come and experience the magic of Fair Isle and I’m sure we’ll be rewarded by some of our visitors finding some good birds for us!

Summer Discount
There’s 25% off the room rate from 1st July to 17th August (although note that the Obs is closed from 1st – 10th August). A fantastic opportunity to come and experience summer on the island.

So if you’re thinking of taking advantage of either of these bookings, or you’d like to visit at any other time, drop us a line at fibo@btconnect.com or call on 01595 760258. Although we’re pretty full for the peak times (mid Sep – mid Oct and late May – early June), there are still some great times to visit and some potentially fantastic birding spells available.
Posted by David Parnaby at 22:59 No comments:

I thought that you probably weren’t too worried about my holiday stories (sunny, Nerja was great, lovely time with the family, not many birds) and that the tales from the FIBO office probably weren’t going to be that exciting (‘did some great photocopying today’), then before you know it, there’s been no blog for a month.

Bird wise, there’s been a few typical winter sightings; Iceland Gull numbers dwindled by early February, although another blast of NW winds brought 5 on 13th February, whilst up to three Glaucous Gulls have also been seen.
The small numbers of wintering seaduck were joined by a Great Northern Diver (13th Feb) and a Valentine’s Day Puffin (which rather unromantically was found half eaten in North Haven the following day). On land, 8 White-fronts and a couple of Pink-feet were occasionally seen amongst the 200 or so Greylags but undoubted highlight was the Coot found by Mairi Thomson and family as they visited at the beginning of February – the first bird of the year to go in the ‘any other species’ at the back of the Log!
Lingering wintering birds (including a couple of Merlin and Peregrine, Water Rail) were joined by a few more species in a hard weather movement at the end of January, with 28 Woodcock, Waxwing, 18 Fieldfare and a few more thrushes, Golden Plover, Jack Snipe and 8 Lapwing all noted.
A few other signs of movement included the first Oystercatchers (17th Jan), Meadow Pipit (1st Feb), Skylark (5th Feb), and Dunlin and Knot from mid-February. Slightly less expected were the Jackdaw (13th Feb) and Short-eared Owl (9th Feb).
All of which has hoisted the year list to 67 species by my reckoning, a solid enough start to the year, although only the Coot is a non-annual bird. With a gale force (or perhaps even severe gale force) NW wind on its way, I’m still holding out for a Gyr, although it will have to be quick, I’m due off the island again on Monday and I’d rather it didn’t turn up when I was away.
One of the exciting things to come out of our time off the island was the Directors' Meeting in which we've fixed a few new deals for visitors to FIBO - more details to follow later this weekend.
Posted by David Parnaby at 14:21 No comments: