There’s not a lot of bird news to report since my last update, some typical winter birds have included a Glaucous Gull, small numbers of Snow Buntings and a few ducks, including a Common Scoter. The goose flock seems to have dispersed, with no sightings of Bean Geese since 14th and no White-fronts since 17th, although the Greylags are still here (along with a Barnacle Goose), so I’m sure they’ll drag in one or two other species during the winter. A wander round the North of the island hoping for a Snowy Owl (or anything else from that neck of the woods!) didn’t produce much at all, although I did manage an owl when a Long-eared circled over my head at Homisdale as dusk approached. Having come from the direction of the Obs, it’s presumably still roosting unseen in the back garden.

The recent highlight has been a movement of Little Auks on 22nd. Although small numbers are seen most days if you stare out to sea, I noticed 17 in a few minutes from the kitchen window (whilst ‘taking a break’ from end of season reports and other paperwork). I thought it might be worth a proper seawatch, so asked Susannah to keep an eye out while I went and got ready (which involves putting on as many clothes as you can manage for sitting on Buness in December). In the short while it took, Susannah had counted another 197 Little Auks streaming south, so I was quite excited about what sort of total we could end up with in the last hour or so of daylight. I was a bit disappointed then, when after half an hour I’d only seen another seven! Still, a total of 221 isn’t bad.

So, with nothing more to report, I’ll end this post by wishing you all a very Merry Christmas. Thank you to all of you who have sent cards and greetings and to all of you who have read the blog during the year. Don’t forget to feed the birds, and if you’re lucky enough to be visited by Blue Tits, Great Tits or any of the other ‘common’ garden birds, make sure you appreciate them!

Posted by David Parnaby at 03:32 No comments:

A typical mixed bag of winter weather has seen some relatively pleasant patches between cold, wintry showers, although things have been generally calm in comparison to last week’s big blows.


It’s been generally the time for getting on with the indoor jobs and end of year work, although there have been a few birds to enjoy. The goose numbers seem to have dwindled a bit today, with no Bean Geese at all noted (although they may well just be hiding somewhere), although there were still 25 White-fronts and a Barnacle Goose.

Having seen a single Greylag head south over Buness this morning, another single went north there this afternoon (they generally aren’t found in this part of the island, so there’s a chance that birds here are actually on the move somewhere), then a skein of ten flew north out to sea on a seawatch this afternoon. Whether they were newly arrived birds from the east, heading north from elsewhere in the UK, or Fair Isle birds departing for Shetland main can only be guessed at. 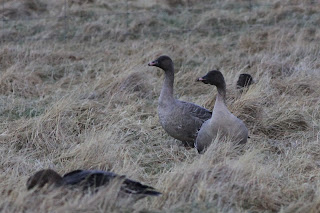 Also on the seawatch, there was a Little Auk (with another in North Haven later where the Great Northern Diver was again seen), two ‘Blue’ Fulmars amongst thousands of regular ones and 60+ Guillemots.
An Iceland Gull was in the North Haven briefly yesterday and there must be a chance of more white-wingers at the end of the week, as strong NW winds are forecast, maybe that dead seal in the South Haven will come up trumps yet…
Posted by David Parnaby at 17:28 No comments:

Not much birding today, with the better weather being a chance to try to patch up the traps a bit (or at least stop the flapping bits from flapping, so the predicted stormy weather at the end of the week will have to work harder to cause any more damage). A quick drive round the island after Kirk saw pretty similar numbers of geese to yesterday, although the bird below was one I'd not seen in the group before. 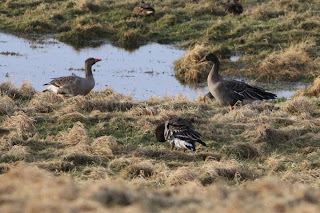 The size, head and neck shape, bill shape and colour all point towards this being a Taiga Bean Goose, quite a different looking beast to most of the accompanying Tundras (although not all the Bean Geese are clear cut to identify to subspecific level). Nick had seen what may have been the same bird whilst I was away, so it probably isn't a new arrival. Few other birds were noted, with the Great Northern Diver still in North Haven, with Long-tailed Ducks here and Finnequoy and a Red-breasted Merganser also at the latter site. The Obs garden held a couple of Robins, with the first Fieldfare I've seen since I returned also here.
With reasonable weather forecast for tomorrow, we'll get a chance to see if there are any surprises lurking around the island (something like that Desert Wheatear that was found in Lerwick this week would be nice!).
Posted by David Parnaby at 22:45 No comments:

So, it looks like we survived. Damage to the Obs has been minimal and it sounds like the rest of the island has managed without anything too serious going wrong. The winds were quite severe again last night, but today has been calmer (still not exactly tropical mind) and it looks like we could get a couple of days of relatively pleasant weather. However, it is clear that the traps have suffered somewhat. Some damage is expected every winter, usually the catching boxes get rattled and wire needs replacing, but this is the worst I’ve seen it (ok, I know I’ve been here less than a year, but it is pretty bad honest!).


The slightly better conditions did enable me to get out for most of today to see what birds were around (although it was still windy enough to avoid most of the cliffs) and it was quite a pleasant selection. A brief seawatch from Buness produced six Little Auks, whilst the NW winds had also brought a couple of Glaucous Gulls (an adult and a first winter) to the North of the island. The mid-November falls seem to have resulted in more birds lingering into December than is sometimes the case, with two Long-eared Owls, 49 Blackbirds, 36 Redwing, 2 Robins, 3 Skylarks, Woodcock and a Carrion Crow noted.
With a bit more time to search out goose flocks today the counts were higher, with 16 Tundra Bean Geese, 26 White-fronted Geese (a couple were possibly Greenland birds, but the light was too poor by the time I saw them to make a definite call), nine Pink-feet and 149 Greylags, along with four Whooper Swans. The Great Northern Diver was in North Haven again (and Tommy saw a Long-tailed Duck in South Harbour), with typical winter fare including a smart male Merlin, Golden Plover and 24 Snow Buntings.

Posted by David Parnaby at 01:08 No comments:

After three weeks away, we’ve returned to Fair Isle. I managed not to miss too many birds, although if I’d checked the North Haven the morning that we left I’d have added seen the 13th Great Crested Grebe for Fair Isle (the first island record since 2005)! But most people on the island have been too busy dealing with the effects of the weather to worry about what birds are around. North-west winds have lashed the island, with winds regularly getting above force 10 and lying snow causing some damage and lots of travel disruption. The Good Shepherd sailed on the day we left then not again until the day we came back, whilst the planes have been hampered by strong winds, lying snow and a frozen runway. That meant we had to take the Good Shepherd to get back to the island, although the crossing was too rough for the van to make it, so who knows when we’ll see that again! The crossing also proved too rough for mine and Susannah’s lunches to make it all the way across as well, although Grace slept through virtually the whole thing (thanks in part to Kenny’s ear defenders!). The Shepherd crew were very helpful and Deryk had put the Obs heating on, got some milk out the freezer and brought the minibus down to the harbour having heard we weren’t feeling great (he even didn't mention the Sunderland results, so we must have looked bad!). Along with the greetings and hugs we had at the harbour, it really highlighted one of our favourite things about Fair Isle, that great community spirit.

No sooner had we returned to the island than the wind picked up again, bringing some violent stormy conditions. We survived Wednesday night without too many problems (a few bits of fence have come loose, there’s some guttering in the garden etc) and the wind dropped enough to get out and about for an hour to check the birds. A good start were two Long-eared Owls in the garden, with a few Redwings, Blackbirds and Robins also lingering around the island and a Woodcock flew past the kitchen window. A Great Northern Diver in North Haven was a nice bird (still largely in breeding plumage) and down the island there were several Greylag flocks with 12 White-fronts, two Bean Geese and a couple of Whooper Swans still present.
The brief lack of wind though was very much the eye of the storm and as we settled down for the evening, the radio crackled out*, ‘Fair Isle: cyclonic becoming northwesterly severe gale 9 to violent storm 11, occasionally hurricane force 12 at first’. And boy did it mean it, the gusts peaked on the island at 98mph overnight and down the island people were unable to sleep as their houses rattled and unidentified objects flew past the windows. Now the wind has dropped to a more manageable 60mph or so we can get out and see what the damage has been...

*note: artistic licence used here as we get our shipping forecast off the internet like most other people nowadays and even if we did listen to it, using the laptop tends to cut down on the crackle.