Well, two days away for a 4 hour meeting turned into five days due to a combination of poor weather and a shortage of pilots at Direct Flight. The High School bairns never got home either, so at least it meant I could spend the weekend with Lachlan...........which was nice!
Anyway, I got home on Monday morning to find that six pale-bellied Brent Geese had arrived during my absence. Lubo was very excited to see me (even more so than my wife and children!) and insisited I take him out for a walk. There are now even more thrushes around with c150 Fieldfare, c60 Redwing, 35 Blackbird, a couple of Song Thrush and a M 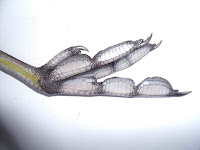 istle Thrush dominating the counts. Waders around the past few days include 12 Golden Plover, 12 Lapwing 3 Dunlin and 20 Curlew but also a couple of Oystercatchers (27th) and a Knot (28th). At least 5 Skylark, 9 Snow Buntings and the male Chaffinch are still thriving. The Coot however is not and now resides in my freezer!
Strong northerly winds and snow arrived today (29th) and is expected to last into next week, so we'll see how things cope with the latest bout of wintry weather.

Last weeks Directors meeting in Inverness was highly productive, trying to (among other things) organise who we want to/should/can invite to the grand opening on 19th June!!
Todays snow caused school to be cancelled but it was too windy and there is not enough snow yet to contemplate sledging. I meanwhile spent a few hours stood on the back of trailer being driven around the roads, sweeping salt onto the roads. The sudden severely strong gusts of wind made this a hazardous occupation and I nearly came off - but just the once! The ponies are not enjoying this cold (windchill of -8C) but they are now getting hardfeed and ample hay and Storm has his comfy rug on (Bijoux IS a rug!). The chickens are bravely battling on and frequently deliver us a full eight eggs.
Up at the Obs the guys are working hard and a noticeable difference is evident downstairs now. We have been (yet again) measuring up for furniture and today Hollie put an order in for a whole pile of beds and dining room furniture!!!!!
Posted by David Parnaby at 18:29 No comments:

Not much to report today with a jaunt round the south as far as the school indicating there was no noticeable difference in bird numbers or species. The day started off fairly calm and mild but was turning cooler and the wind picking up by the afternoon. The Good Shepherd returned before it got too bad (says I who wasn't on it!!)! I spent the afternoon on the computer, mostly sorting out data/articles etc for other people and preparing for leaving the isle tomorrow.

I'm away sooth for a Directors meeting in Inverness on Thursday. Wind is due to ease by the morning so I should get out. However getting back on Friday already looks like its not going to happen! It looks like it may ease for the weekend before picking up again on Monday. I just hope that Direct Flight will fly on Saturday - the High School bairns are also due back for the weekend, so that may encourage them to fly!
Posted by David Parnaby at 20:06 No comments:

The sun came out for a couple of hours today, lifting the temperature to nearly 8C. Lubo and I stomped around the south for three hours, flushing 42 Common Snipe and a single Jack Snipe plus a Short-eared Owl (which may well be an overwintering bird) and a couple of Woodcock. The Goldeneye was still present in South Harbour and there are now 8 Dunlin foraging with 40+ Turnstone at Gaila. Thrushes are still in evidence, including the Mistle Thrush at Kenaby and there were 7 Snow Buntings foraging around Leogh. The strangest sighting however was a Cormorant standing in a field, surrounded by sheep, at Houll!! It was apparently seen yesterday on various small ponds on the isle and although it can fly it surely can't be healthy!?

Hollie took advantage of the nicer weather to walk to meet the kids from school and walk down the east road to Kenaby to feed the ponies. This prompted the said beasts (the ponies not the children) to vacate their small area of hard standing by the gate and hay rack and trot the full length of the field to meet them!
I went to Fire Training instead whereupon we emptied the appliance of water during our annual pressure testing of all the hoses. All are sound! We then refilled it at the Vaadal Reservoir.
In the office, major headaches. My computer is really, really slow whilst Hollie's just turns itself off after five minutes!! We are looking into replacements but the choice is bewildering!! Help!!!
We are also in the process of seeking quotes for furniture for the New Obs - how exciting!
Posted by David Parnaby at 17:24 No comments:

The severe gale force wind of the past couple of days finally abated and with Lubo also champing at the bit (so to speak) to go for a walk, I headed out for a thrash as far north as the Obs. It is certainly a bit milder now too (+6 or 7 degrees celsius). There are even more t

hrushes around with 100 Fieldfare, 50 Redwing and 27 Blackbird logged plus a Mistle Thrush - spied at Busta as I returned home, so also an addition to the Burkle garden list!!! Star bird however was the Coot in the Barkland ditches. We also turned up a Goldeneye in South Harbour (with six Wigeon and three Teal the other ducks of note) and flushed 16 Woodcock. Greylags still number around the 300 mark and Barnacle Geese around one! The vast majority of the Curlews have moved on but the five Dunlin remain. Lingering small stuff include six Skylark, a Meadow Pipit, two Linnet and a Chaffinch.
Posted by David Parnaby at 18:45 No comments:

The ground is a few degrees above freezing now but the gale force SE'ly takes the wind-chill a degree or two below zero! There has been a movement of thrushes, mainly Fieldfare, with 85 counted in fields around the south today. Still lots of Curlews present plus six Golden Plover, a Lapwing and five Dunlin. The two Linnets remain faithful to the seed in the garden. A Grey Heron is new in South Harbour.

Did I mention that we are now taking bookings for the 2010 season? Come up and see the new Observatory - its very impressive and is going to be lovely!
Posted by David Parnaby at 19:51 No comments:

Already its over a week into the New Year (How time flies!) but already the year list is looking good with some early additions. Sanderling and Dunlin were added on New Years Day and a Chaffinch a day later and since then Oystercatcher and Linnet have made it. A Barnacle Goose is with the 350(!) Greylags, a Wigeon and 6 Teal and a couple of Red-breasted Mergansers are the wildfowl highlights. Up to 16 Golden Plover, a few Jack Snipe and Woodcock plus a couple of Lapwings with the usual Common Snipe (130+), Redshanks (c25) and Turnstones (c60) have been lost amongst the extraordinary record influx of Curlews.....I have logged at least 185 but they are so spread out and mobile, not remaining in any cohesive flock that the actual number may be actually over 200!
Passerines have been understandably scarce but a handful of Skylarks and Robins are toughing it out whilst Blackbirds and Redwings just about make it into double figures.

The New Years Party was held here at Burkle and following several highly entertaining guising sketches most of the isle descended just after the bells. After consuming an extraordinary amount of alcohol the last ones departed shortly after 7am!!!

Whilst the rest of the nation appears to be under a mountain of snow, here on Fair Isle we've hardly had any! We've not even given the kids their sledges we bought then for xmas - waiting for the big surprise when (if?) it does snow! Its been cold, but not as cold as elsewhere and with no wind recently its actually been very pleasant! Ice is the word and I've spent many hours gritting the roads with Iain Stout and Darren Wiseman and even spreading sand on the airstrip so the high school kids could get back to school. Lubo has been sent flying a few times as he is incapable of going anywhere slowly! The ponies are finding it tough to walk on the hard ground too, so are not moving far from the hard standing Ian Best has provided fro them, and from their haynets! Chickens slumped to a low of four eggs a week or so back but have rallied and today we got a full house (8 eggs) for the first time since 25th October (yes! we keep a record!).
Posted by David Parnaby at 21:11 No comments:

The year petered out without too much excitement on the birding scene. A couple of Glaucous Gulls on 8th December was an-all-too-rare sight so far this winter. The Chiffchaff lasted until 11th at least whilst a few Skylarks and three Meadow Pipits made it right to the end. Thrush numbers dwindled right down. A Sparrowhawk passed through on 13th and a female Hen Harrier dallied awhile from 18th-23rd. Boxing day turned up 39(!) Curlew, 7 Dunlin and 2 Sanderling plus a female Gadwall.

Our first ever Christmas on the isle (after 11 seasons) was a totally chilled (in more ways than one) occasion. Normally we are travelling around the country dragging children from pillar to post, camping out here and there at various friend's and family's houses, which whilst fantastic to see as many people as we can is a far from relaxing time away! This year has been so different. The kids have enjoyed it (well, they would enjoy Xmas wherever we were) and Lubo was able to experience it all with us too (and open his presents with us!). We were invited to Setter for xmas lunch where we all stuffed our faces, drank too much and played some noisy board games!! Lubo just played with Molly!
Posted by David Parnaby at 20:50 No comments: