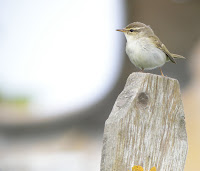 Autumn is starting to pick up with more warblers appearing. Willow Warblers (eg 20 on 14th) make up the bulk but a scattering of Garden Warblers, a couple of Blackcap plus Grasshopper and Reed Warbler have also been seen. Highlights however have been the delightful Wood Warblers (up to three from 11th), Barred Warblers (3+ from 14th) and best of all an Arctic Warbler (14th-15th). The latter was discovered by my AW Jack Ashton-Booth (remember that name folks!) who was ecstatic to find one of his "dream birds" and to watch Arctic, Barred and Garden Warblers all together on top of one small bush at Shirva! All the photos with this post are his. Other recent sightings include Blackbird & Common Rosefinch (10th), Kestrel (11th), Sand Martin (14th) and a trickle of common waders, including Ruff (11th & 12th), Green Sandpiper (11th & 16th) and two Black-tailed Godwits. The breeding Sedge Warblers are now feeding young whilst the Swallows at the Mast are trying for a second brood!! Lets hope the marauding cats don't find them!
At the Obs, work continues with the building completion and going through the snagging list - including persuading the water from the showers to run down the drains instead of into the bedrooms - which will be nice!
At home, kids went back to school today, except for Lachlan - who is stuck here due to rain & mist/low cloud preventing the planes from getting in. Hollie and I have become proud (grand)parents again as our broody hen (actually Triona's hen we have borrowed) has hatched out two of the six eggs she has been sitting on for the past three weeks. We have admitted defeat in our fight with the hen mites. Despite part dismantling, scrubbing, spraying, fumigating and powdering the hen house some of the little blighters remain alive. I have started to make a new, larger one and will have to burn the infested building. The ponies have been getting a fair amount of exercise lately with Hollie and the kids as well as the Kenaby crowd taking them out almost daily. They certainly need it as Bijoux has taken to ducking under the electric fence when the power is off at night and stuffing her face on a field of fresh grass!! We have been involved with alot of baling recently. Lifting the sileage bales becomes back-breaking after a while but the hay bales are just a joy to work with. We now have a nice stack of wrapped sileage bales on our croft, ready for the sheep in the winter, although Triona's cow has already leant over the fence and made a start on a few!!
Posted by David Parnaby at 11:22 1 comment:

Its still pretty quiet on the birding front with just occasional Willow Warbler, a couple of Garden Warblers but lots of Wheatears on the passerine front. A trickle of Waders have provided variety with Greenshank, Green Sandpiper, Common Sandpiper, Knot, Sanderling, Dunlin and Black-tailed Godwit all been noted in very small numbers (1-5) along with the higher numbers of Lapwing, Oystercatcher, Ringed Plover and Curlew. A Short-eared Owl is the only other thing of note. Swallows have now fledged from the airstrip shed and the new Obs garage. The nights are really drawing in fast and it was very dark and still last night - the boys thus trapped 55 European Storm Petrels in just an hour and a half but there was not even a sniff of a Leach's.
The new Obs building workforce have been taking advantage of the nice spell of weather to crack on with the garage and, although still monstrously huge, it looks much nicer now. Stairs are beginning to appear in the Warden's house! Meanwhile, Puffinn workcampers (supervised by Simon) have been completing the stone path around the outside of the building which was started by Sue (Simon's mum) and they have also commenced with rabbit-proofing the garden and bushes.
We shut the Obs last week, so that all staff could get their holidays in, which gave myself and Hollie time to go out to Shetland for a few days hard labour! We took Lachlan with us to help and spent some time with his girlfriend, Mhairi, and her parents. We all went out to lunch at the Hay's Dock Restaurant to celebrate the two teenagers exceptional Higher Exam results:-)
Myself and Hollie also celebrated TEN years of marriage that day........with a vegeburger supper in the B&B that evening!! Who said romance is dead!?
Whilst out, Hollie took the opportunity to go for a riding lesson and the instructor was extremely complimentary about her riding abilities which has given her the necessary confidence boost to continue with teaching Storm and the children and once back she even (successfully) took Storm for a ride completely on her own!!
(Hol's) Mum has continued to hold the Burkle fort and kept the three younger kids (and dog) safe, fed, entertained and busy for which myself and Hollie are extremely grateful. With the accommodation up here not available for them, it would be impossible to do our jobs effectively without her.
The Burkle chicken mites have succeeded in keeping the poor hens out of their hut for weeks now, except when they need to lay an egg. Thus, we stripped the said hut back to its bare boards and nuked it with a sulphur candle and then sprayed the crevices with insect spray. Tomorrow we will reassemble it, dust the chickens with mite powder and let them back in. Hopefully that will be enough!?
The Big Event on the isle this summer has been the multi-Birthday Bash at Setter Barn with several people celebrating (?) significant landmark birthdays. A cracking night involving lots of live music, lots of dancing, lots of banging tunes and even a bit of impromptu (but totally appropriate!?) karaoke!!! The wee sma' hours came round far too fast that night! There were lots of aching heads, arms and legs the following day......but (unfortunately) that didn't stop the obligatory Sunday footie match!!!
Posted by David Parnaby at 20:38 No comments: