Remember, remember, the blog in November.

Ok, sorry it's been a while. Despite what you may think, we've not been hibernating. Far from it in fact; Susannah and I have had to learn to look after ourselves now that the Domestic Team have all left! In between remembering how to cook, clean and look after the children, I kind of forgot to update the blog. It wasn't helped by Susannah popping off the island for a night and eventually making it back about a week later, but, as we're heading off for a couple of weeks, I thought it was time to finally catch up. So make yourself a brew, settle down and catch up on the goings on of the Parnabys and life on Fair Isle during the last month.
﻿ ﻿ So what’s been going on…

Let’s start with the birds. There was a general theme of a few lingering highlights at the start of the month, then things quietened down before an unexpected late fall on 12th then a gradual decline in numbers and variety again as another fabulous autumn finally drifted away to be replaced by the typical winter fodder of wind, few birds and a ridiculous amount of paperwork (over 70 descriptions amassed this year – sorry if I’ve mentioned that before, but between that and Annual Reports, it’s fair to say that I’m not exactly sitting back with a cigar on at this time of year!).
We couldn’t manage a last hurrah, despite there being Short-billed Dowitcher to the south, Dusky Warbler to the North and, perhaps most gallingly of all, Little Egret to the west (Foula leaving us as one of the few main Shetland islands not to have recorded a Little Egret, surely one of the commonest vagrants to Shetland not to have turned up here yet. In fact, with 4 Purple Heron, 2 Night Heron and a Little Bittern on the Fair Isle list, it’s bizarre that there hasn’t been a single Egret or a Bittern yet). In fact, the only new addition to the year list since the Siberian Rubythroat was a Shorelark at North Light, a lovely highlight in the fall of 12th (although it disappeared shortly after discovery as a truly evil hailstorm swept the island. It’s not often I attribute emotions to the weather, but these hail stones really did want to hurt people, they were nasty – I was left whimpering on the ground trying to hide behind a rock on the exposed clifftops of Easter Lother).
The 12th also produced counts of 37 Woodcock, 646 Blackbird, 164 Fieldfare, 93 Redwing and 11 Robin (including the Dutch-ringed bird that seems to be attempting to overwinter at the Obs), although with only two people covering the island, these are likely to be underestimates, particularly of Woodcock which were probably spread thinly across the whole island.
There were few other signs of new arrivals, although there were 3 Goldfinch on 2nd and 2 from 20th-25th (rather late records for this species). There was also Kestrel (4th-15th), Short-eared Owl (6th and 12th), Jackdaw (7th-10th), Moorhen (19th-20th), Knot (3rd), Linnet (14th and 17th) and Black Redstart (2 on 2nd with one to 4th), whilst a Wren trapped on 5th appeared not to be one of the local birds.
Lingerers included the Olive-backed Pipit (to 2nd), Richard’s Pipit (to 12th), Bullfinch (to 2nd), Grey Wagtail (to 16th), Hen Harrier (to 9th), Chaffinch (with 2 still present), Brambling and Mealy Redpolls (up to 10) to mid-month, Chiffchaff and Blackcap (both to 19th), Goldcrest (1st), Woodpigeon (to 2nd), whilst the last Bonxie was seen on 8th and the Tree Sparrow that turned up in mid-June finally departed (it was last seen on 6th).
Typical winter fare included up to 2 Glaucous Gulls on 5 dates, Iceland Gull (sightings of juveniles on 1st, 14th, 20th and 23rd), Water Rail (at Lower Stoneybrek on 7th, in what appears to be a quiet autumn and winter for this species), a maximum of 98 Snow Buntings, 3 Little Auk on 5th (with another on 10th) and up to 3 Jack Snipe amongst good numbers of Snipe (which peaked at 142 on 7th).
Wildfowl are also usually prominent at this time of year, with highlights including 3 Goosander (21st-22nd), a few south-bound Whooper Swans (13 in total, including one lingering from 19th), Greylag passage peaking at 365 on 4th, with 303 on 19th, up to 8 Barnacle Geese (until 17th) and up to 17 Pink-footed Geese, mostly early in the month. At sea there were up to 10 blue Fulmar and a Sooty Shearwater from the Good Shepherd (5th) and a Great Northern Diver off South Light (12th).
Aside from the birds, we’ve also been keeping an eye on the Grey Seal population, which seems to have done a tiny bit better this year, although pupping was rather late.

A few updates from wildlife sightings from the last few weeks, starting with those immense Killer Whales that appeared at the start of the month. Andy Foote from NAKID has identified the individuals as a group that are regularly seen in North Scotland and the Northern Isles (and as far as the Faroes) in the winter and spring, with the male being about 19 years old and the youngest a calf from the winter of 2009/10.
Other updates from previous sightings involve DNA analysis of Chiffchaffs; the count of 41 on 15th October that seemed to involve mostly tristis-type birds has been backed up by the lab work, that showed that the two trapped birds were indeed both of this subspecies. The Arctic Warbler on 14th October (one of the latest Fair Isle records) was also shown to be an Arctic Warbler on DNA (rather than either of the recently split, but possibly not identifiable in the field, far-Eastern warblers: Japanese Leaf or Kamchatka). Thanks as ever to Professor Martin Collinson for providing this information.

﻿So, I still await the ultimate prize of a first for Britain during my time as Warden, but on the subject of winning prizes (see what I did there?), there are a couple of awards to mention. FIBO itself has won a Shetland Environmental Award in recognition of our work and the green credentials of the building, whilst Nick Riddiford’s efforts in campaigning for a Marine Protected Area were rewarded with a Nature of Scotland Award.
Congratulations Nick, a well deserved award and everyone at FIBO hopes you are rewarded with the prize you really want and thoroughly deserve – suitable protection for the waters around Fair Isle.
So, that's all for now folks. As I mentioned, we're away until 17th December (all being well with the weather...), so if the year is going to be crowned by one last outrageous rarity, I hope it waits until then to turn up!

1st November
It's the end of the season, the final guest has left (a day late after the planes were cancelled yesterday) and most of the staff have gone after a very busy season. Many thanks are due to all of them for their efforts this year - it's been another good one, so thank you Will, Richard, Teresa, Ann, Graham, Becki, Tracey, Steffan, Billy, Noa, Kieran, Daniel, Jake, Alex, Livvy, Chris, Rachel, Tim, Maggie, Liz, Jenny, Janet, Sally, Julia, Rob and Tegan and of course, Susannah. The Directors of FIBOT have also provided their usual mix of enthusiasm and expertise, which is so important to the Obs. There are many more people who﻿ help the Obs in a crucial way during the year and so thanks are also due to the many islanders who have helped out during the year including Angela, Hollie, Deryk, Raluca, Alice, Iain and Kenny who have all done various jobs at the Obs and for the many others who have helped out in other ways including Robert & Fiona, Jimmy & Florrie, Nick & Elizabeth, Elena, Tommy & Liz, Neil & Pat and Dave. Massive apologies to anyone I may have missed and thanks to all the islanders for their friendship and support. Susannah, the kids and I are very lucky to live on Fair Isle, not just for the birds and the beauty of the island, but especially the people.
Thanks also, of course, to all of you who have helped FIBO to continue its work, by visiting, volunteering or joining the Friends of Fair Isle.
I'll try to complete a more thorough summary of the year later, but as a brief look back, 2013 will be remembered from an ornithological point of view as another poor year for most seabirds but an excellent one for rare migrants. A regular dose of rarities (although a lack of many large falls) has brought us over 70 descriptions (around  half of them for BBRC), a current year list of around 212, with over 3500 birds (of over 110 species) ringed and two additions to the Fair Isle list (Swinhoe's Petrel and Red-eyed Vireo taking the island list to 381: with a few potential splits maybe on the cards [my money is on the Subalpine Warblers, Eastern Yellow Wagtail, and hopefully Eastern Grasshopper Warbler, with a few geese maybe to come as well] I wonder how long it will take to get to 400?).
Today's plans for a quiet day were somewhat scuppered by the appearance of Killer Whales actually in North Haven. The five animals then spent a few hours hunting seals from Buness to North Light, although they often went missing for spells. What a way to end the season!
﻿ 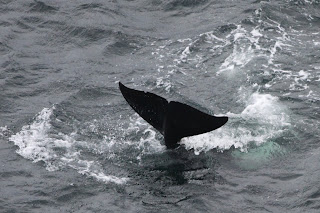 A quick update on birds as well from the last few days, which has felt very much like the end of the autumn. A few arrivals still occurred, with Red-breasted Flycatcher and 2 Linnet (27th), and a day of finch movement on 28th brought a new Bullfinch (which remained to 31st), 5 Greenfinch and 3 Crossbill. On 31st there was a Long-eared Owl (in another quiet autumn for the species) and 31 Woodcock. Lingering birds included the Olive-backed Pipit (to 31st), Richard’s Pipit (to 29th). Other lingering species included up to 209 Snow Buntings, 2 Lapland Buntings, small numbers of Common Redpolls, up to 2 Grey Wagtail, a Tree Sparrow (still present from the late spring), up to 2 Black Redstart and small numbers of Blackcap (although the last Chiffchaff so far was seen on 29th). There was a noticeable clearout of thrushes on 31st as the birding started to settle into the winter routine.

Typically, a few white-wingers started to appear with up to 2 Glaucous Gulls (an adult and juv) and a first-winter Iceland Gull (1st), whilst Little Auks on 28th and 31st were also typical for the time of year (although the latter heading over the Kirk was less typical). A Great Northern Diver, up to 23 Long-tailed Ducks and a Sooty Shearwater (from the Good Shepherd on 29th) were the highlights from the sea, whilst the marshy areas yielded an impressive 132 Snipe (28th) with up to 5 Jack Snipe amongst them. A few Whooper Swans and small groups of Pink-footed Geese passed through, whilst a Hen Harrier lingered to 1st at least.
Early November can turn up some cracking rarities, but if the strong SW winds and rain that have set in today continue tomorrow I may well take advantage of the end of the season and have a lie-in and an afternoon listening to the football (which is suddenly looking a bit better as a Sunderland fan, although I'll not upset our many visiting Geordies by saying why)!
Posted by David Parnaby at 23:51 No comments: