BoP around the clock!

27th March
Another beautiful day of weather that looked good for raptors turned out to be just that. A ringtail Hen Harrier was hunting over Gilsetter in the early morning, but was not seen again. Later in the day, Susannah found a magnificent adult male Hen Harrier over Kirki Mire. It was seen again briefly at Da Water then, whilst Susannah and I were chatting at the Plantation trap, the Hen Harrier appeared a few metres away, grabbed a Blackbird, perched for a short while then headed north with its prey. Although unfortunate for the Blackbird, it was a superb sight to witness.
There was no sign of the Marsh Harrier today (sadly for those who predicted it for the prediction competition, which doesn’t start until 1st April!), but the raptor theme continued with the first Sparrowhawk of the year. Another addition to the year list came in the form of two Grey Wagtails over Mavers Geo early this morning, whilst the first Golden Plover and Snow Bunting for a while also appeared amongst the scattering of lingering birds.

With Assistant Warden Will Miles arriving back for the start of the season today, and the weather set to remain good for a while (with the possibility of a slightly stronger easterly wind), I suspect there’ll be a few more birds to report in the next few days.

Posted by David Parnaby at 21:53 No comments:

26th March
Some bad weather swept through the island at the weekend, but the start of the week has seen much more pleasant conditions. Generally there has been little change in the birds present, but today saw the first real avian highlight of the month when Fair Isle’s 45th Marsh Harrier spent less than half an hour around the south of the island. A fantastic male, it was the earliest island record since one on 24th-25th March 1995 (the earliest ever for Fair Isle) and may have been the bird seen a few days ago on mainland Shetland.
Other birds included good numbers of Lapwings and Blackbirds still around, whilst the two Chaffinch and Robin and single Dunnock and Reed Bunting may all have been lingering birds.
The calm seas enabled the crew of the Good Shepherd to spot a Minke Whale two miles north of the island this morning, whilst a Porpoise off Buness this evening was the first record of the year. A settled week seems to be on the cards, which will surely encourage a few more birds to move.

Posted by David Parnaby at 22:55 No comments:

Snow, sun and some migrants.

As the easterlies continue there are still birds coming in, although looking for them in the occasional blizzards and biting cold isn't always easy.
Still, it's great to be out and about with new birds virtually every day and the building feeling of anticipation for the forthcoming season. One of the advantages of having a comparatively restricted number of species over the winter is that migrants are much easier to detect as they come through, so the additions of Dunnock (19th) and Reed Bunting (21st) to the year list obviously involved new migrants.
Razorbills also returned in numbers for the first time on 20th, with at least 50 around some of the North Cliff's colonies. Other migrants increasing in numbers included two Grey Heron (19th with one still on 20th), two Chaffinch (19th, with one at the Obs from 20th), 12 Woodpigeon (19th), three Robin (21st), 60 Fieldfare (21st), 19 Redwing and six Dunlin (21st).
Birds still present in similar numbers included around 100 Blackbird, 95 Lapwings, two Water Rail, three Mistle Thrush, four Woodcock, Rook, Merlin and the ever faithful Great Tit.

Another sign that the new season is rapidly approaching was the arrival of the first food and drink order (two pallets of booze, so there's no worries about the Obs bar running dry!), whilst Susannah and I have spent a good part of today getting the new beds for the seasonal staff (who start returning from next week) into the Obs. There's still plenty to be done (there always is!), but we're looking forward to meeting our first guests in a few weeks. In the meantime, it should be an enjoyable weekend as the wind is set to start easing and there'll hopefully be a few more birds to be found (can we break last year's inexplicable Stonechat duck*? I think there's still a Mars Bar behind the bar from last autumn for the first person to add it to the year list!). Also, there's no league football, so no chance of Sunderland getting beaten this week.
* 'Stonechat duck' refers to the fact we didn't see any on the island last year, not some bizarre hybrid
Posted by David Parnaby at 23:52 No comments:

A wild and windy day seemed to result in a lot of the birds keeping their heads down a bit, with fewer Blackbirds and Lapwings noted this morning. There were things in though and, as the wind started to ease, a Chaffinch was found at the Haa and a Rook flew over Vaasetter - the firsts of their kind to make it to the island this year. An immature Iceland Gull was on Meoness this morning (presumably a north-bound migrant in what has been a quiet year for this species) and a juvenile Glaucous Gull over Finnequoy may well have been one of the birds seen on and off throughout the winter.
The wind has continued to drop through the evening and tomorrow will hopefully be a calmer day, with the chance of a few more birds to be found. We'll not know whether the swell has died down enough for the Good Shepherd to sail until the morning, but the last two trips have both resulted in sightings of Killer Whale (two that were probably young bulls a fortnight ago, and what may have been one of the same last week), so it'll be interesting to see whether there is a repeat performance when it does go (although I suspect even the chance of Killer Whale wouldn't be enough to tempt my Mum to take to the seas when my parents visit next week!).

Things are falling into place. 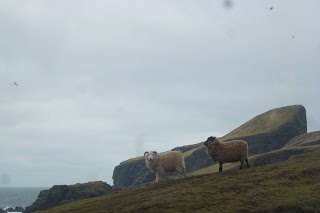 Last week’s easterlies largely originated from the Arctic, so didn’t bring very much at all with them except cold temperatures and wintry showers. However, another batch of easterlies at the weekend were more productive and brought the first small fall of the season.
The most obvious feature of the fall were Lapwings, with 61 on 16th increasing to 112 the next day and there was also a noticeable arrival of thrushes, with counts (largely reached by combining a southern census on 16th and northern one on 17th) of around 100 Blackbirds, 25 Fieldfare, 20 Redwing, 10 Song Thrush and five Mistle Thrush (the first of the year arrived on 9th). Other additions to the year list were a north bound Grey Heron high overhead on 15th, Goldcrest in North Raeva on 16th, Meadow Pipit on Dronger (17th) and at least 6 Black-headed Gulls scattered around the island (17th). Other species arriving included Woodcock (with at least 5 on 17th), Woodpigeon (ten on 16th), Dunlin (16th), up to three Snow Buntings and an increase in Skylarks and Rock Pipits, whilst up to nine Ravens on Malcolm’s Head may well also have been migrants. ‘Old favourites’ that must be thinking of leaving soon included Great Tit, Moorhen and Water Rail, whilst Merlin, Peregrine and Robin also lingered.
It looks like we could be due another week of easterly winds, which may well bring more common migrants and perhaps the first scarcity, although I hope we're not using up all of our easterlies before we reach the main migration season!
Posted by David Parnaby at 09:26 No comments:


Early March has seen a few signs of spring peeking through the gloom of winter, with frogspawn seen on 4th, a day that also produced singing Fair Isle Wren, nest-building Shags and displaying Tysties and a general feeling that we might be through the worst of the winter...
There haven't been too many new birds; a Snow Bunting went over Vaasetter (5th), there was a Robin at the Obs (4th, with two the following day), a juvenile Peregrine was over Meoness (4th) and amongst the 'regulars', a Glaucous Gull was seen on 2nd-3rd and the Great Tit, Moorhen and Greenland White-front all remained. It still feels like we're a long way off the first Wheatears!
With not much bird news to talk about, I'll mention a few other points:

That's all for now, I'll maybe have some more bird news after the strong easterlies that we seem set to get for the rest of the week, but I think they'll probably have come just a bit too early in the month to really bring anything exciting in. We'll soon find out...
Posted by David Parnaby at 01:07 No comments:

Well, it has to be said that the extra pair of eyes scouring the island didn’t make that much difference! No offence to my visiting friend (and let’s face it, you know someone’s a real friend when they visit you on Fair Isle in February – it’s not like they’ve come for the birding at this time of year!), it’s just there really hasn’t been much to see. The only addition to the year list has been a Woodpigeon, as we wait for the traditional slow Shetland spring to pick up pace – although that could still be a few weeks off yet despite the rather pleasant weather conditions recently.
Skylarks have been increasing in numbers, with up to 35 by the end of the month, Lapwings rose to 22 and a few small waves of thrushes have been noticed amongst the wintering birds (eg 60 Fieldfare on 25th February) but it’s generally been familiar faces on the bird front. Lingerers include Great Tit, Greenland White-fronted Goose, up to two Glaucous Gulls (19th-20th), at least two Water Rail and Moorhen, whilst a scattering of wildfowl included up to 58 Greylag Geese, seven Teal, Long-tailed Duck, three Common Scoter, two Goldeneye and a Red-breasted Merganser. The Beached Bird Survey last Sunday saw a couple of dead Guillemots (one of which was oiled; the second this week) and a dead Shag (the first to be found this winter, as we seem to have largely missed out on the wrecks that have occurred further south), although I did also find my glove that I’d lost a couple of weeks before, which was handy. Better news regarding Shags concerns a youngster fitted with a darvic ring (red ‘HRF’) here in July last year, which was spotted on Thursday in Yell, the first of the 17 or so that were given these rings last year to have been relocated so far.

Posted by David Parnaby at 00:52 No comments: