See you in a few weeks.

We're all off to a meeting in Aberdeen on Thursday, so we've started the travel now with ﻿Susannah and Grace flying off this afternoon, whilst I will take to the high seas tomorrow morning. Last year saw my two trips on the Good Shepherd result in a 50% strike rate for seasickness, so hopefully I can get 2012 off to a good start as the forecast is pretty reasonable... Having just missed Humpback Whales in several places, it looks like I could do the same again this week as there are two lingering off Balmedie, which we will sail past on the Northlink Ferry on Thursday morning - in the dark. I fully expect them to be breaching off Sheep Rock by Friday as well.
Whilst I may sneak in a blog post next week if anything exciting happens on my travels, it is likely that this will be it until early February, so here are a few pictures from recent days to keep you going!

One of the really interesting parts of working at FIBO (and there are lots!) is meeting such a variety of people. We owe gratitude to so many people after our first year here, but to start with, I’d just like to say a big thank you to everyone who supported the Obs by visiting us in 2011. It was lovely to meet you all and we're really pleased that so many of you are coming back in 2012.
Another group of people we’d like to say thanks to are the Friends of Fair Isle. Our Friends have supported the Obs throughout our 60 year history, especially recently with the new building. So on behalf of Susannah and myself and the FIBO Directors: ‘Thank You’.
Our Friends will be receiving a newsletter and the 2009/10 Annual Report in the next few weeks (we’re off the island shortly until early February, so all being well it should be with you by March). Any members who haven’t had anything from us by April should get in touch just to make sure we have your correct details.
If you’re not a Friend of Fair Isle, but would like to get the report, now is the time to join. Simply go to the FIBO website http://www.fairislebirdobs.co.uk/Friends_of_FI/friends.htm, print the Bankers Order, gift aid and application form and send them to us (the suggested amount is £10, but you can give more if you like). Any subscription forms received between now and April will be processed for the start of the membership year on 1st April 2012 and we’ll send you the latest newsletter and 2009/10 Annual Report. What’s more, the 2011 Annual Report will also be published this financial year, so you’ll get two newsletters and two Annual Reports (covering three years) for your year’s subscription. With your help we’re able to continue our ornithological work and production of the Annual Report, so once again, thanks. 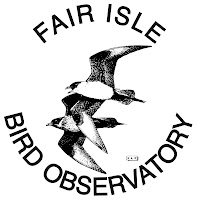 And last but not least, thanks to all of you who have followed the blog this year and especially those of you who have taken the time to let me know what you think of it. It's the birds that make it worthwhile and there'll hopefully be plenty more of those to write about in 2012.
Posted by David Parnaby at 11:44 No comments:

Posted by David Parnaby at 23:31 No comments:

The Gull Next Door

The Iceland Gull influx continues with huge flocks in the Faroes and considerable numbers in Shetland. Up until now Fair Isle had been graced by three individuals this month (although never more than two in a day), but this morning I was able to watch one from the kitchen window whilst Tommy phoned with news of three on Meoness.
In the end, six were found across the island along with a smart first-winter Glaucous Gull which took gratefully and greedily to the dead seal in South Haven. 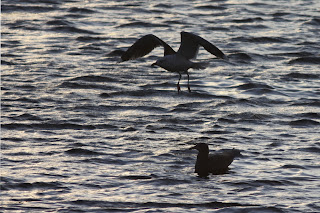 A couple more year-ticks today with a Whooper Swan near the Obs and a Red-throated Diver seen flying over the island, although generally there were not many new birds to report.
With more strong North-westerly winds tonight (the building is creaking a bit even as I speak), perhaps tomorrow will see a few more white-wingers around. The forecast is for a bright day tomorrow, so could be good for some birding. It's still wet underfoot though, as Dave Wheeler points out that we haven't had consecutive days without rain since 18th - 20th November. On the subject of weather, Dave has also provided an interesting summary for December which shows that it was the second coolest since 2001 (only last year was colder), the wettest since 2006, the dullest since 2002 and the windiest since 1998 (with 13 gale days beaten only by the 14 of 1994 since there were 21 in 1980)!

Posted by David Parnaby at 22:34 No comments:

I'd just started ﻿writing a blog post when Susannah burst in to announce 'Killer Whales North Haven!'. OK, so the blog can wait as Grace is swaddled, optics are grabbed and we go haring out the Obs. The lucky islander who had phoned had seen a bull, two females and a calf right in the Haven, but they'd just headed out and he hadn't been able to see which way they'd gone. We gambled on North, but checking from Furse and North Light produced nothing (and was so windy we had to hold on to Grace!), so a quick change of direction and south we went.
﻿Whilst driving past Dutfield, Susannah saw a mighty fin close in to Goorn. It surfaced twice, but was gone by the time I managed to park and grab my bins - I'd dipped again (hopefully not an omen for the new year)! If we'd stayed in the Obs we'd probably have got great views from the lounge, but that's always the gamble with Killer Whales, and I'm not complaining after my sightings last year. A vigil at South Harbour failed to produce anything cetacean-wise, but at least there were some birds as consolation, with a Merlin chasing Rock Pipits a pleaant sight. Best bird though was the second winter Iceland Gull that dropped in briefly, as Fair Isle finally cashed in on the white-winged bonanza that the rest of Shetland is enjoying! ﻿The drive back also produced six White-fronts and a Pink-foot in with the Greylags, but the ferocious wind generally made birding difficult. With a calmer day forecast for tomorrow, perhaps something may turn up. The good folk at Nature in Shetland﻿﻿ ﻿have posted on Facebook that January 8th in the past has turned up Tengmalm's Owl, Ross's Gull and Bittern on Shetland, any of those would do me tomorrow (and we'll probably open the Obs early for the season if we get a Tengmalm's!).

Posted by David Parnaby at 23:39 No comments:

The Year So Far.

Happy New Year to you all and thanks again to everyone who was in touch recently with Christmas greetings and best wishes for 2012. I'll try to post a reflection of 2011 soon, for now though most of my work time is clearing the office based jobs before the start of the next season (which seems to be looming excitingly ever closer on the horizon). A quick update on the start of 2012 first though:﻿

A total of 38 species were logged on 1st January, with Tommy and Henry starting the day and me joining them after lunch (well, it had been a late Hogmanay﻿). The highlight was probably the lovely first-winter Glaucous Gull floating around the north of the island, although it was nice to see seven European White-fronts back amongst the Greylags after a fortnight or so missing. The following day saw Wigeon and Teal added to the total whilst today was also duck-themed, with Common Scoter, Long-tailed Duck and Red-breasted Merganser getting their first tick of the year in the Log, along with Black-headed Gull, at least a couple of which were in the south of the island.
There's plenty of non-bird news as well, but that will have to come later - I'm sure there'll be a few more rainy days in which I can update the blog.
Posted by David Parnaby at 23:37 No comments: