I have found out where my neck-collared Bewick's Swan 124E came from. It was first caught in the Netherlands in late December 2009, where it acquired its jewellery. It stayed there for a week into 2010 before relocating to Norfolk where it was last seen on 10th January 2010. It then went missing until mid-October 2010 when it was spotted in Latvia, presumably on its way back west, having bred somewhere in the Russian arctic. By early November it was back in the Netherlands, then hopped over the border into Germany for December, back to Netherlands for a few of weeks on its way to Norfolk, where it was spotted on 28th January 2011. On 10th February it was back in the Netherlands once more, then six days later arrived on Fair Isle!! It, and its four companions, appear to have gone again already. Where will it turn up next?
The lone Whooper Swan is still here though.
The last few days has seen a bit of passage with the first Ringed Plovers arriving, 40+ Oystercatchers, 80+ Lapwing, 60+ Curlew, 40+ Skylark and one or two Black-headed Gulls and single male Wigeon and Goldeneye moving through.
The Bewick's (Tundra) Swans have by far been the birding highlight of the year so far but there have been other sightings of note......, a Grey Plover in early January, two groups (3 & 6) of Waxwings in January, an Icelandic colour-ringed Sanderling in early February and a 'fuscus' type Lesser Black-backed Gull and at least three each of Iceland and Glaucous Gulls. Small stuff has included a few (5) 'Mealy' Redpolls and single Chaffinch, Greenfinch and Linnet.

Aside from birds, the Obs has survived the winter well although I am currently struggling to get the heating to work in the Wardens house (and the new Warden is due to arrive next week! Aaaargh!!!).
It has been a poor winter for the animals, with everybody having to start supplementary feeding several weeks earlier than usual. Just recently our sheep have increased their intake of silage so I am having to give them more, however many of the bales are really mouldy when I open them and cannot be fed to them. At this rate I am going to run out. I would just start giving them nuts however the whole island is waiting for the nuts to arrive as the Good Shepherd has not managed to sail for weeks due to the strong winds and high seas!!!
We did however get a plane in on Thursday, which meant that Lachlan (and his girlfriend, Mhairi) came home, fresh from finishing his Higher Prelims. Its great to see him. He has offers from both Glasgow and Edinburgh University Vet Schools but can't make his mind up which to take up!
Yesterday was a sad day on the isle as we all gathered together to say our final goodbye to Stuart Wilson, who passed away on Sunday morning aged 76. It was an understandably moving occasion with all the men taking it in turns to help carry the coffin and fill in the grave. The wind and rain even abated slightly for the couple of hours so that, although still cold, we didn't get soaked. We all converged at Aesterhoull afterwards to give him a good send-off - in the manner he would have wished!
But life goes on and, being Thursday, it was Darts Club in the evening where a good evening was enjoyed by all, including Stuart's son, daughter and grand-daughter and I was highly delighted to score a maximum 180!!!!
Posted by David Parnaby at 18:15 2 comments:

Well, I am ashamed that this is my first blog entry of 2011.......and with just a few weeks left before I hand over to the new Warden!Anyway, this isn't going to be a massive catchup but I felt compelled to write as I've just had a Fair Isle tick! Five Bewick's Swans on Da Water......one of them sporting a neck collar and rings! I'll have to wait for the ringing details. For a nice comparison there was a Whooper on Golden wWater. And whilst on the 'big white' theme......a second winter Glaucous Gull on Vaasetter! 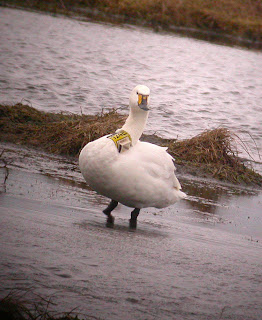 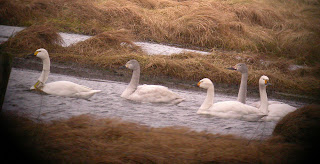 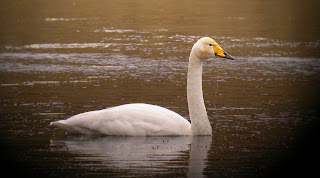 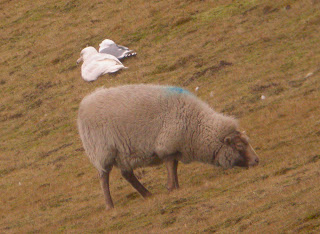